Small Company as per Companies Act, 2013

What is a small company?

Small Company is introduced in Section 2(85) of the Companies Act, 2013. It was introduced so as to relieve small companies from the compliance of the larger ones. A company is considered to be a small company if it matches certain criteria (as discussed below). The qualification criteria is on grounds of paid-up share capital and the turnover according to the last year’s profit and loss account. They also have less norms to comply with owing to their small size. Below, we discuss the grounds for qualification and relaxations given to a Small Company as per Companies Act, 2013.

Grounds for qualification as a small company as per Companies Act, 2013:

(Provided that the higher limit shall not exceed 5 crore rupees)

(Provided that the higher limit shall not exceed 20 crore rupees)

Both the above grounds were to be met for a company to qualify as a small company.

A gazette notification issued by the Ministry of Corporate Affairs dated 13th February, 2015, states: “in section 2, in clause (85), in sub-clause (i), for the word “or” occurring at the end, the word “and” shall be substituted”. This means that only a company which meets both the criteria for eligibility will be considered a small company and meeting only one condition would not suffice.

The following companies are not to be considered small companies-

An interpretation of the relaxations provided to small companies:

Benefits and Exemption for Small Companies: 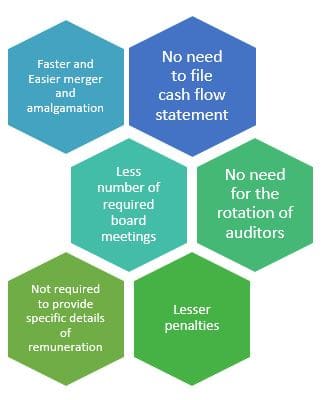 Strategic Importance of a Small Company for the Economy –

Small companies play an integral role in supporting the economy. They often act as troubleshooters for the society they are based out of. Since they tackle small-scale or local problems. These companies contribute taxes and at the same time offer employment to the region they operate in. They promote entrepreneurial spirit and often times aid the government in supplying necessities to the community.

Small companies can target problems of the consumers which the large companies just cannot. Due to their small size, they can adapt to the changing environment. and the changing habits of the consumers. They can easily adopt habits which are the most beneficial and profitable to them. They often handle certain business functions of the larger firms and thus contribute to their smooth functioning as well. The large firms can outsource some part of their work to small companies. As a result, they act as a catalyst for the growth and development of the community. Owing to these reasons, the government has given such exemptions to small companies.

Small companies play an important role in reducing unemployment and in the advancement of the economy. It is thereby important to ensure that the management of such an entity goes on smoothly without much intervention or outside hindrances. Keeping this in mind, the government’s relaxations come as a boon for such companies. However, it is also important for small business owners to know about the provision of a small company as per companies Act. to know about these relaxations so that they could make full use of them.