All About Producer Company

Agriculture in India is the most important sector of the Indian economy. This is due to its vast contribution to the nation’s GDP and employment. Around 85% of the land in India is owned by small and medium farmers producing different varieties of food and grains. For most of history, Indian farmers have been in dark regarding Farmer Producer Companies. Owing to the lack of education, all they spent their time on was sowing the seeds and waiting for the harvest to grow so that they could sell it in the market. They were unaware of the existence of such a corporate structure let alone its benefits. Through this article, we aim to tell readers All About Producer Company.

The Government introduced SFAC (Small Farmers Agribusiness Consortium) and NABARD (National Bank for Agricultural and Rural Development) to solve the problems of the farmers by organizing them into Producer Organisations (POs). The producer companies themselves can also be a part of a Producer Organisation. The producer here refers to farmers and all those agriculturalists producing food products. Forming an organisation acknowledged by the market and the government helps the member-farmers to access credit and market linkages. Collective decision making further improves the plight of the farmers.

What is a Producer Organisation? (PO)

A producer organisation is an organisation formed by the primary producers which include farmers, fishermen, weavers, milk producers, craftsmen etc. A PO can also be a cooperative society which makes available the shared profits and benefits to all the member-farmers.

Producer Company is a company registered under the Companies Act, 2013, which has the objective of production, harvesting, procurement, grading, pooling, handling, marketing, selling, export of primary produce of the Members or import of goods or services for their benefit. Produce are things that have been produced or grown, especially by farming.

The motive of a Producer Company is to ensure that the problems of the primary member-farmers are reduced by providing them adequate help and better income. Since, an individual farmer does not have enough volume of the produce to get the necessary benefits of the economy, the organisations tend to ensure a healthy division of revenue and benefits within the organisational members. By combining the profits and the surplus, the primary producers can enjoy the benefits of the economy. The unity of all the producers serves as a strong voice in the market and lets them command a better bargaining power. 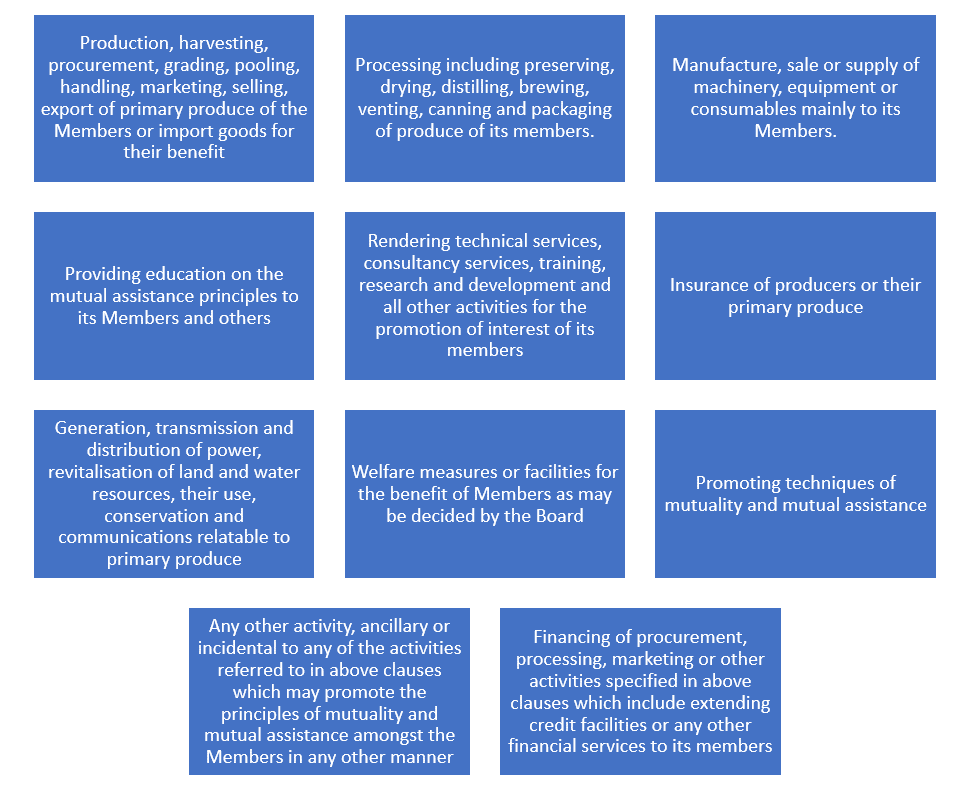 The following are the features of the Producer Company: 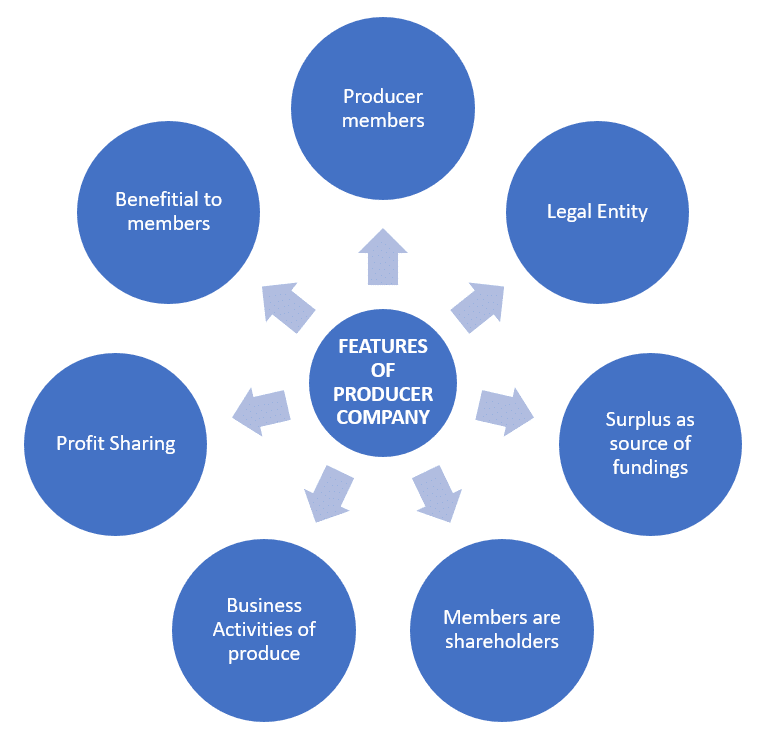 The NABARD, SFAC and other government departments aimed at producer sector benefits, support the promotion of POs. The Corporate and Domestic & International Aid Agencies have also joined hands in improving the conditions of the producers. These provide the financial and/or technical support to the Producer Organisation Promoting Institution (POPI) for promotion and hand-holding of the PO.

A PO supports the members by providing them a huge portion of the income as many middlemen in the market get removed. By aggregating the demand for inputs, the PO can buy in bulk, thus procuring raw material at cheaper price compared to individual purchase. The services provided to the members also reduce the transportation cost to the market. Thus, reducing the added cost to the produce. All the aggregate produce offers a better price per unit produce to the member-producers. The PO aims at making the members aware about the market forces and techniques for better produce. The main motive remains to provide more income to the primary producers.

The following are the benefits of the Producer company:

As the name suggests, the Producer Company seems to be a Public Company but as per the Companies Act, 1961, once registered, the same shall become a body corporate as if it is a Private Company and shall not under any circumstances deemed to be a Public Company. The following are the basic differences between the three forms of Companies: 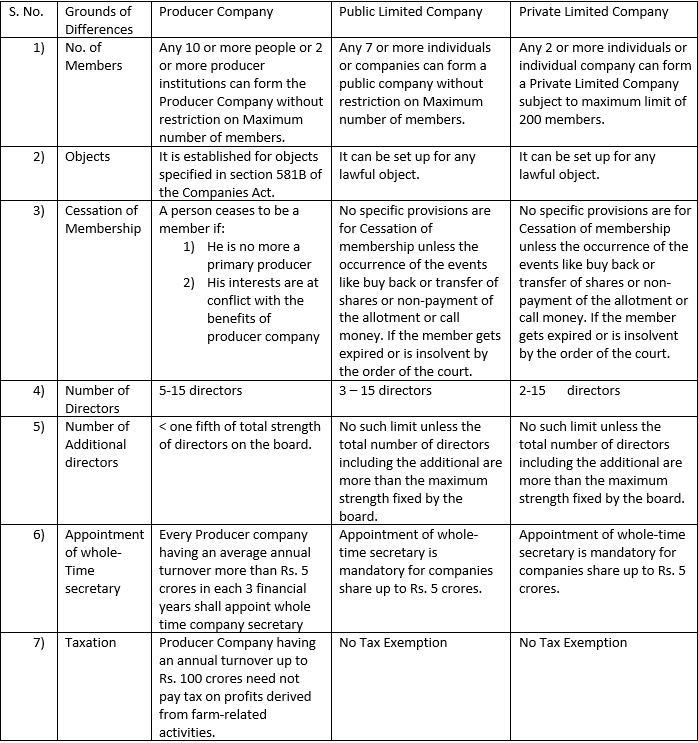 To understand the governance of the company, it can be segregated in three major divisions as defined by the law (a detailed description follows):

Management of the Producer Company 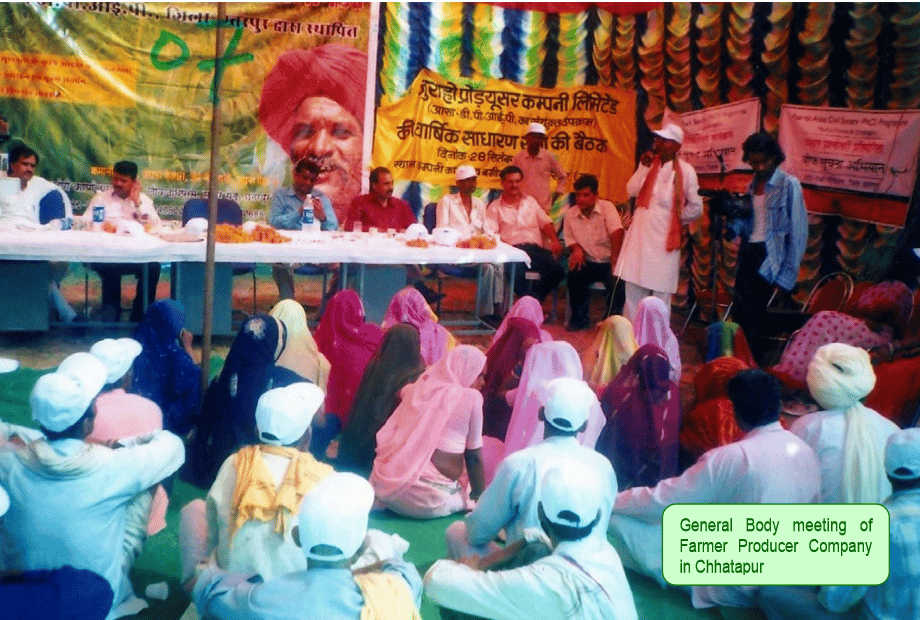 The same shall have the liability of its Members and can neither be limited by guarantee with or without share capital nor unlimited liability companies.

Functions of Board of directors of the Producer Company 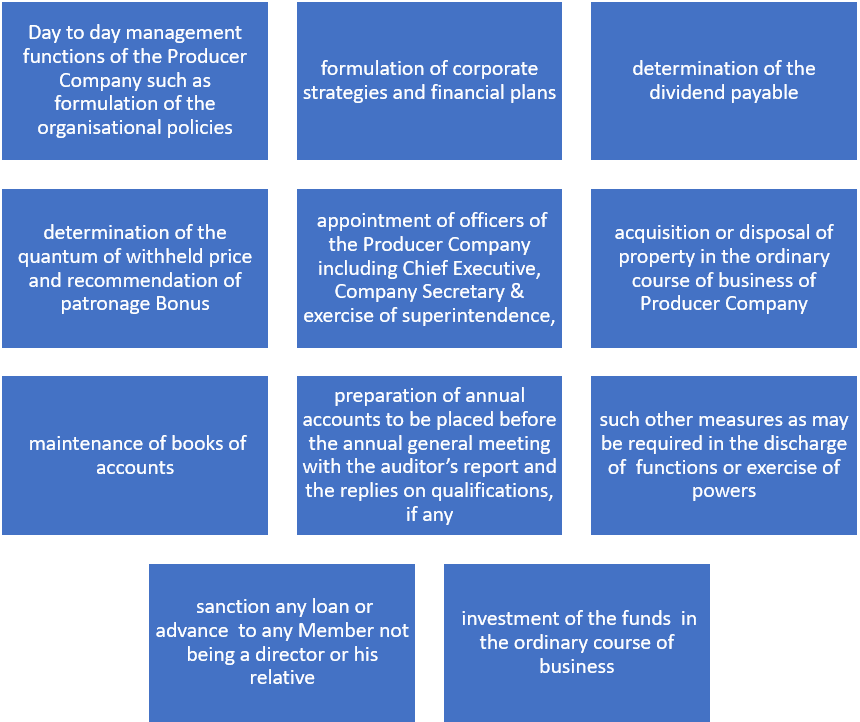 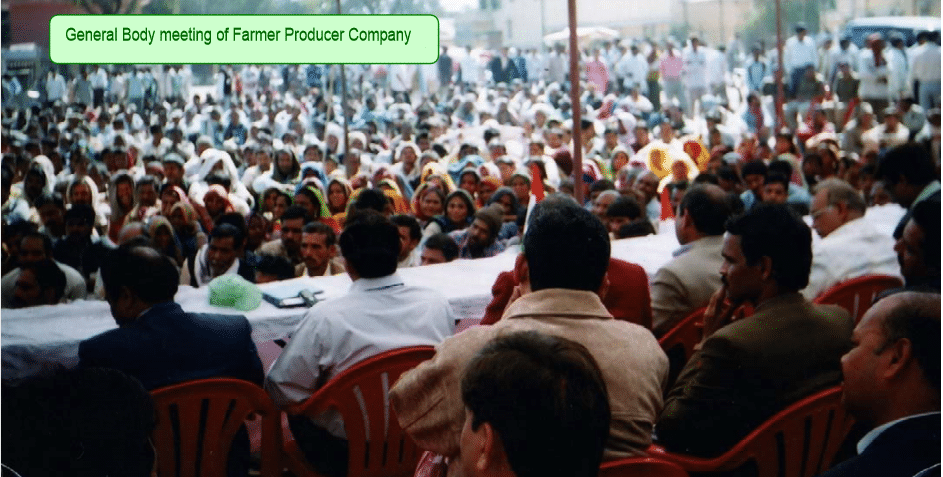 Rights of the Members of Producer Company

Producer Companies as an Institution have been conceptualized and structured, taking into the considerations of farmers, agriculturists (termed as ‘Producers’), with a view that the business activities relating to agriculture, be channelized and governed in a formal manner.